When was the last time you woke up your teenager at 5:30 in the morning? A bit of a chore, yes, but worth it. My two oldest boys, Cedric and Elijah, were with me and they were getting used to being dragged out of bed earlier than they would care to get used to. With a photographer father, however, this becomes the norm when you?re out on an adventure.
Cedric, the oldest, was my video-camera man for this trip and I?m glad to have had the help for sure.
We got out to the grove by about 6:45 or so and were shooting by 7:00. The mosquitos were horrendous. It was not a fun shoot. But we persisted! Also, it seems that most of the compositions I was getting were vertical panoramas. I?m not sure why, but it seems that?s all I was seeing that day. Most of the horizontal images just didn?t seem to work.
Maybe it was due to the trees. They, after all, are quite tall and obviously rather vertical in nature.

This first image was originally envisioned as a focus stack vertical panorama. Doing so would have made the bark on the background tree perfectly in focus. And that?s actually the way I shot it. The upper frame is purely the trunk fully in focus. The lower portion was photographed twice, once with the ferns in focus and once with the tree in focus. When looking things over in Lightroom I decided I really liked the shallower depth-of-field shot and I wanted to keep it this way. It provides an emphasis on the ferns and makes the tree recede to a supporting element. Easy enough, except I didn?t have the shot of the upper section out of focus. That?s where Photoshop comes in.
I processed the images identically in Lightroom so they?d look the same. I then opened them in Photoshop as layers, so one was stacked right on top of the other. I then expanded the canvas in Photoshop to accommodate for the vertical pano size and positioned the upper image underneath the fern image in the image stack. I then used Photoshop?s lens blur filter to bring just the right amount of blur into the image. All I had to do then was dress it up so the transition from one frame to the next was seamless and viola, it was done. I actually had one other visual distraction to take care of, but that?s where the rubber stamp tool comes into play.
For a video walkthrough please scroll down to the bottom of the page and watch the YouTube video I put together on this place. It covers all the images here with this one probably being the easiest one to process. Use this link to jump right to where this image is addressed in post production.

I really like this image. It?s probably my favorite of the bunch. I shot it in three main frames, so it?s basically a focused stacked panoramic as well. However, I cheated a bit.
I did the same procedure as above with the exception of the transition between the foreground elements and the mid ground elements. I used Photoshop to select all the items that were in focus, thereby eliminating the background items that were blurry. I made a mask to hide those blurry items and then it was essentially done. Except for one thing. The log was certainly visible in the mid ground frame, but since I was focused on that other tree that was lying on the ground the foreground log was blurry. How to fix that? Actually, it was rather easy. I simply lowered the position of that layer visually. It was underneath the foreground layer in the layer stack, and I just tucked it down further behind it. The blurry sections of the tree went away and I had a happy image. That wasn?t my first idea, but it was rather fun to discover and to simply make it happen. While the scene is technically manipulated it?s not something you?d be able to notice otherwise. Watch the video on YouTube to see exactly what I?m talking about. This link starts you right where you need to be to see this image come to life in Photoshop.

This image was probably the most difficult of all those I shot at stout grove. It?s a focused stacked image. Getting a (roughly) one-second exposure of a fern to line up right (no wind) and to show me the only-in-focus-areas was quite tricky and took quite a while to do. In the video I speed through the process and don?t even include it all. But it?s a good exercise in getting it just right, or at least as right as one can hope to get it. It?s three images tall with about 30% overlap, but that bottom section was shot twice for the different focus areas. It came out good, and I?m proud of it. But man, did it take a while to make happen in Photoshop. Also, my Wacom tablet got a lot of use on this one. This link will take you right to the start of working on this shot in the YouTube video. 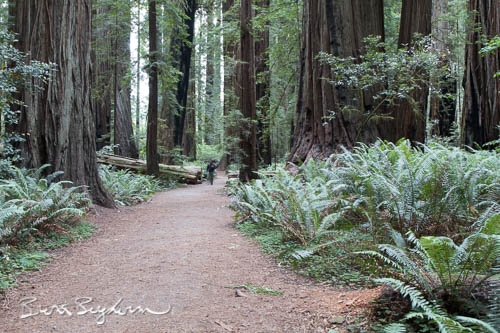 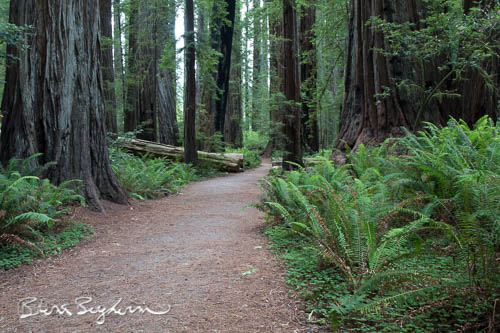 I decided to toss these in here simply to show you how much better your images can look if you use a polarizer when shooting greenery like this. There?s moisture on those leaves and it has a certain shine to it. Using the polarizer helps to block out that glare/shine and you can enjoy the beautiful green leaves the way they were meant to be enjoyed. Our eyes often will ?filter? it for us but if you want your viewers to experience it the way you saw and felt it then a polarizer just might do the trick for you. All other shots here in this shoot were done with a polarizer filter. 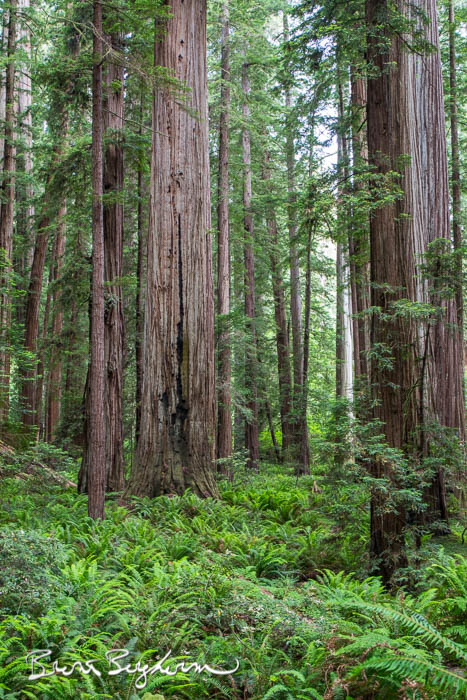 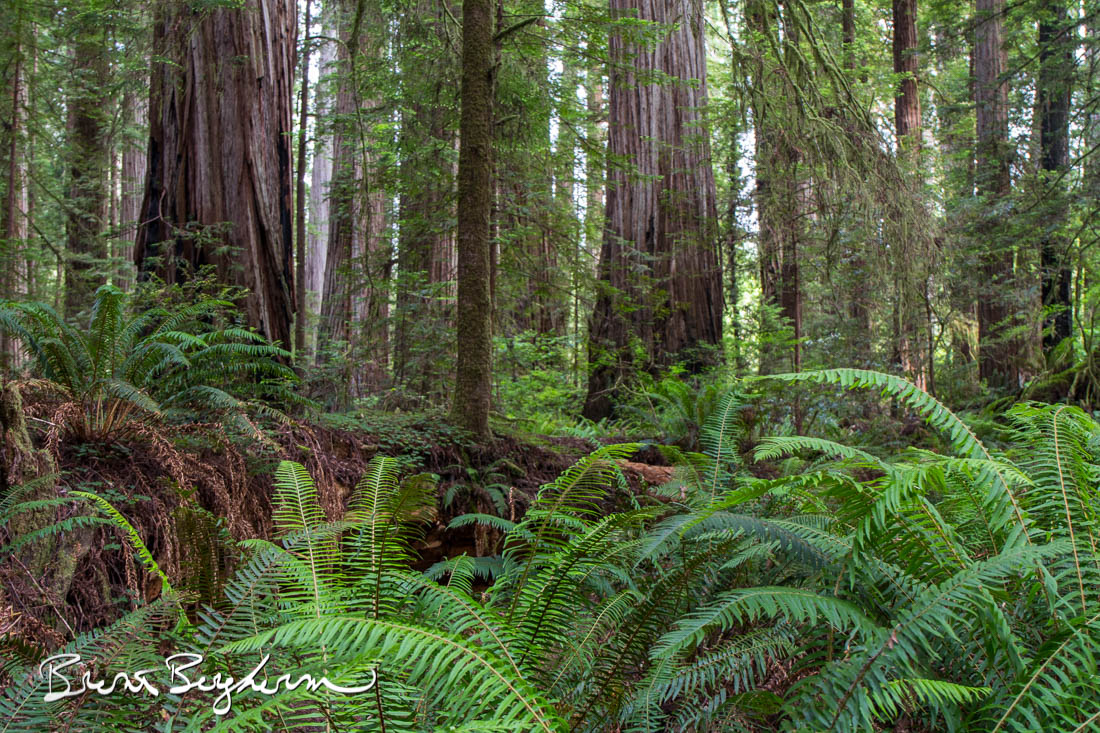 These are just more fun in Stout Grove. It?s truly a beautiful place and I highly recommend you go. I was there in late June and the weather was excellent that time of year. It was slightly cool, about upper 60s and lower 70s for the daily high temps. One time it reached to upper 70s. It?s gorgeous along the coast and these beautiful natural areas are a photographer?s paradise.

This map shows you the approximate location of Stout Grove. 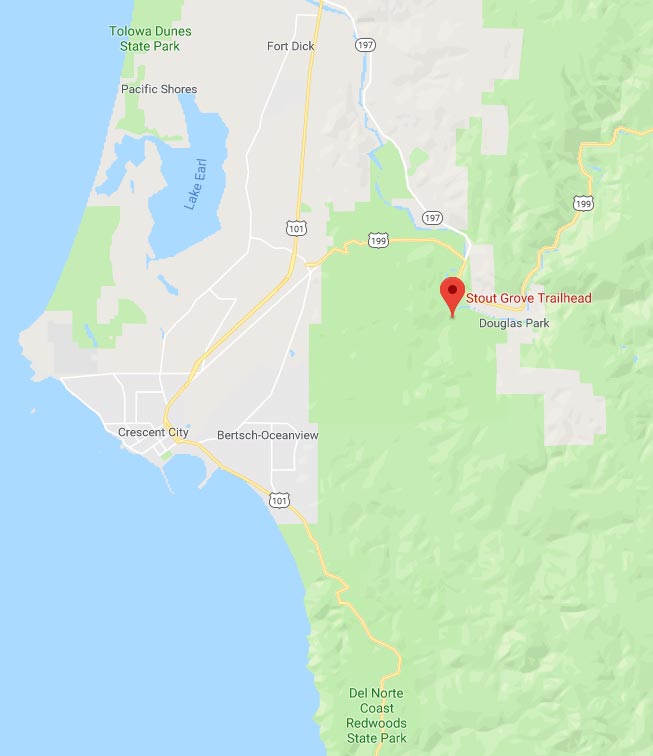 Here?s the YouTube Video I?ve been talking about. If you clicked the links above they will have taken you to the video on YouTube directly and they?ll also take you to the specific time where I start talking about the post production for those images. Otherwise you can watch the whole thing here. Enjoy.
Until Next Time, Happy Shooting!

The Great Outdoors Photography School is a service of